I'm sure I'm not the only one who has fallen in love with the costuming on Starz' production of Outlander.  It's not that unusual to see 18th century costuming in movies, but it is a nice change of pace to see costumes from before the American Revolution or what common folk wore.  I've been struck by the graceful simplicity of the designs. 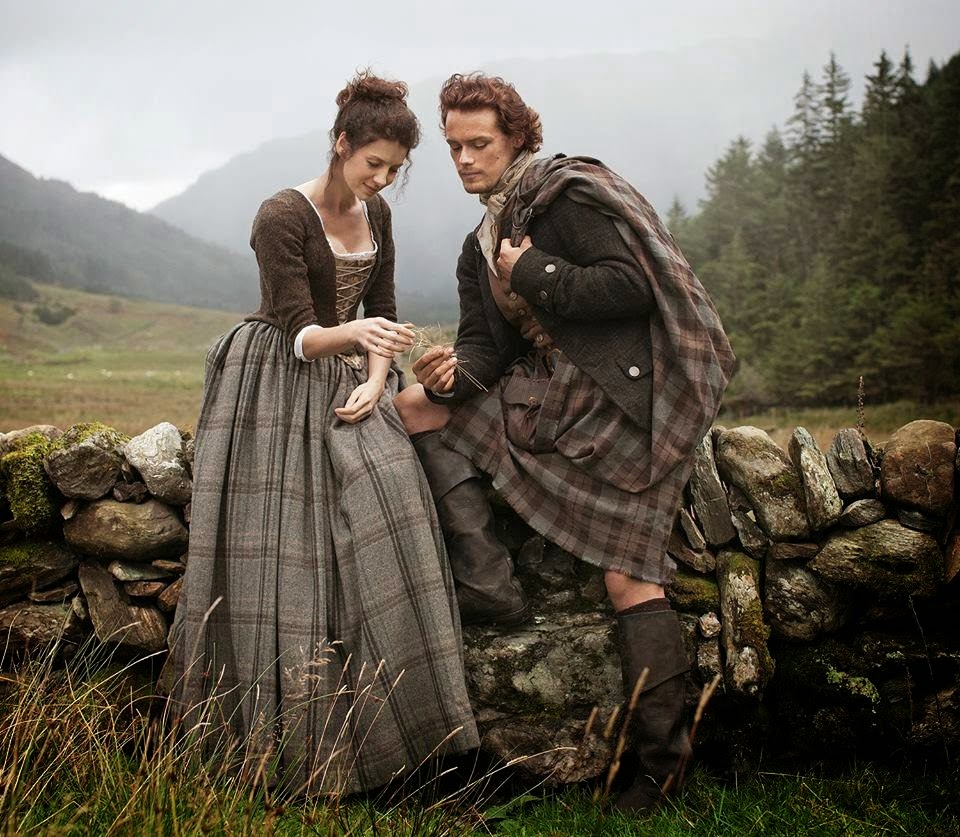 Which of course means that I want to make one.  I'm so backlogged on my projects that realistically I won't get to that for a long time, but a costumer can dream, can't she?

I've done some preliminary research on patterns and thought I would share that.  I will start with some relatively easy patterns for less experienced seamstresses, them move on to historically correct patterns for the hard core historical costumers.  Also, except as noted, I have not personally tried these patterns nor found reviews on them. 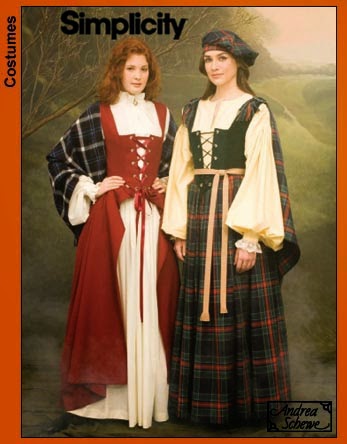 Starting off with a pattern marketed towards sewers with average skills and who just want a general Scottish look, several years ago Simplicity came out with their Celtic collection, including 3623 for women.  It's more Renaissance fair than 1700s, but it's still charming.  It's currently out of print.  It surprises me that Simplicity did not reissue it in anticipation of  Outlander coming out.  They have a limited number of copies available on their website and you can also find more on Ebay and Etsy.  The pattern was previously released under the number 0663, so check for that also.

For the look in the above photo from the show, the only jacket pattern I have found for the 1740s, when Outlander is set, is the Period Impressions 1735-1740 Open Front Jacket.  I have never used a Period Impressions pattern before, but the sense I get from the Great Pattern Review of the Greater Bay Area Costumer's Guild is that they are usually pretty good.

J. P. Ryan had another good contender with their A Fine Collection of Ladies' Jackets.  I have used patterns by that company years ago and remember them as being pretty straightforward.  The earliest jacket in this collection is dated to 1750, but it does have the advantage of offering variations that are appropriate up to the early 1780s for other projects you might have in mind.  View C-D actually looks the most like the jacket in the Outlander photo, but J. P. Ryan dates it to a couple of decades later.

For the various underpinnings and skirt that go along with the outfit, J. P. Ryan has a nice set of Women's Basic Garments.  That includes a shift, petticoat, pocket, handkerchief, short gown, and apron.  My understanding is that only the short gown and pocket are actual patterns.  The rest are diagrams and instructions.  You could probably draft your own using instructions easily found on the internet, such as these instructions for a shift from La Couturiere Parisienne.  Tidings from the 18th Century by Beth Gilgun has diagrams and instructions for basic women's clothing, plus a wealth of other information.

Of course, one will also need a set of stays ("corset" to most modern folks) to get the proper silhouette.  Advanced costumers can use Mara Riley's instructions on how to modify the patterns from the Elizabethan Corset Generator to work for the 18th century form.  I've had good luck with the corset generator.  If the boning placement is not clear to you, there is a good diagram for that in Tidings from the 18th Century.

If that sounds like too much of a challenge for you, there are plenty of stays patterns available.  Since the characters in Outlander were pretty active, you can use more lightly boned jumps instead of the more constricting full stays.  Those also come in front opening versions - much easier for us who live alone or have husbands who are at a loss at helping their wives get laced up.  Mill Farm offers a Jumps or Leather Stays pattern. My one experience working with a Mill Farm pattern, their Women's Riding Habit Jacket and Waistcoat, went extremely well.  Tailor's Guide has an even more lightly boned set in their Ladies' Partially Boned Stays pattern.  If you do want to go for a fully boned set of stays, I have used J.P. Ryan's strapless stays without problem.

Finally, the aforementioned Mara Riley has a well regarded book out, Whatever Shall I Wear? A Guide to Assembling a Woman's Basic 18th C. Wardrobe, that goes into the specifics of color and fabric choices, accessories, etc. for working class women throughout the 18th century.  If you are going to spend all that time and money making a costume, you might as well get it right.  The Dress of the People: Everyday Fashion in Eighteenth-Century England by John Styles also sounds like a good resource.  Obviously, it focuses on England, not Scotland, but chances are that there are a lot of commonalities.

So, there you have it.  If you do try these patterns or have already used them, please let me know what you thought of them.

Update: Simplicity has come out with 2 Outlander style patterns for women.  I've written another blog with the details.