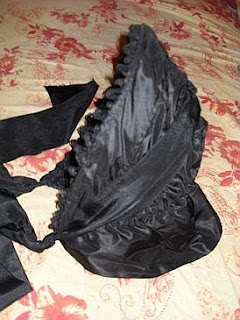 The Octagon Ladies Repository offers patterns taken from originals that had been printed in ladies' magazines from the Civil War era. I have access to some of the original magazines they were taken from, but frankly, I am delighted not to have enlarge and size them myself. As with the originals, they aren't the most detailed patterns in terms of the instructions and assume that the seamstress knows how to make some of the simpler pattern pieces that aren't included. However, they make up for that by being very low cost.

One thing to note about this pattern is that, like the original, it does not include a pattern for the "curtain" piece that covers the back of the neck. I made a pattern for it by making a rectangle 26" by 5 1/2". I marked a point 4" from each end along the top edge, then drew a softly curved line down to the bottom corners, so that the pattern piece looked kind of like a very long orange slice. I doubled that, although I understand that original bonnets from the period usually just had one layer of the outer fabric and underlined it with something a little stiffer. If you aren't familiar with bonnet making, it's the curved edge that gets gathered and sewn onto the lower edge of the bonnet.

The basic pattern went together very quickly. I used 16 gauge wire for the ribs and added and extra 1/2 " onto the lengths so that I could make little loops at the ends to thread the bottom wire through. Then I turned the ends of the bottom wire back around the loops of the front rib so that it would not poke through the fabric. Unfortunately, the instructions produce a silhouette that does not match the illustration on the front (a common problem with illustrations from that time period!). With the lengths of wire as directed, the side view of the bonnet fitted close to the head until the last section where it flared up suddenly. It reminded me of a 1930's baby bonnet. I wanted the gentle slope as seen in the illustration, so I replaced the second and third wires from the front with a 24" one and a 19" one. 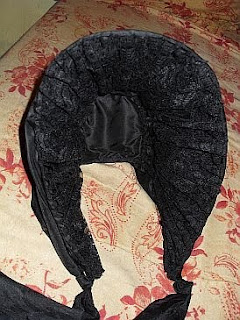 They do include illustrations of other bonnets from the magazines to give you ideas on trimming. For the frill inside the brim, I used 2 yards of 5 1/2" lace. They don't give instructions on how to do that, but if you look at period illustrations, it isn't hard to figure out. Use at least 2 yards of ribbon, ideally 4 inches or more wide, for the ties. My ties ended up being unfashionably short because when I bought the ribbon, I wasn't planning on putting it around the crown as part of the trim. Since mine is supposed to be a first mourning bonnet, I did not add any trim beyond that.

I'm quite pleased with the end result. It looks very similar to a photograph I've seen of a period bonnet. My overall assessment is that I would not recommend this pattern to a beginning costumer, as the pattern requires some modification. They might be OK using my additional suggestions as posted here, though. As far as bonnets in general go, the drawn bonnet was much easier to make than ones using the standard covered buckram and wire construction that I've tried in the past. I would also suggest that anyone interested in making a Civil War era bonnet join The Sewing Academy and do a search on "bonnet" to find all of the discussions they've had on bonnet making there. Those ladies really know their stuff and were a godsend in helping me figure out what I was doing with this one. 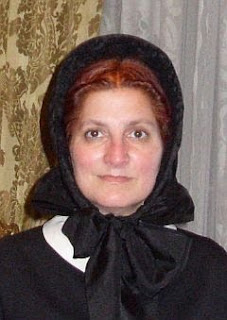