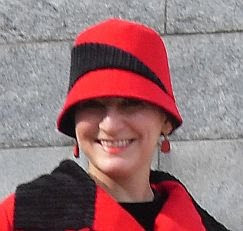 I picked up this pattern years ago. It's a set of modern hats designed by Patricia Underwood. A few of the hats have a very retro feel to them, including a turban, a fedora, and a cloche. So far, I've made the turban for a fortunetelling costume and the cloche. My only issue with them is that the pattern seems to run a little small. I made the hats according to my head measurement, which is well within the medium size range, but think I would have been happier if I had made the large size instead.

It's been a few years since I made the turban, so I don't remember the details about making it. It is made of stretch material, so the fit is very forgiving. My only issue is that the shell tends to ride up on my head the longer I wear it, exposing the lining.

The style of the cloche is perfect for an art deco feel, with a nice slice of contrasting color around the crown. I made mine of bright red fine wale corduroy trimmed with mixed wale black corduroy. I was a little surprised that the instructions did not call for the cloche to be interfaced. I was concerned that the crown would not have enough body, so I interfaced it, anyway. That is probably part of the problem as to why it fits a little tight. However, I think I made the right choice in that respect. The only other thing that bothered me is that the silhouette of the hat is more like a 1960's bucket hat, with the back being shorter than the front. The cloches I've seen from around 1927 were more uniform in length. If I use this pattern again, I will modify the brim so that it is the same width front and back. It isn't quite as noticeable when the hat is on my head, but I'm fussy about the details. However, the end result looked stunning, so I can't complain.